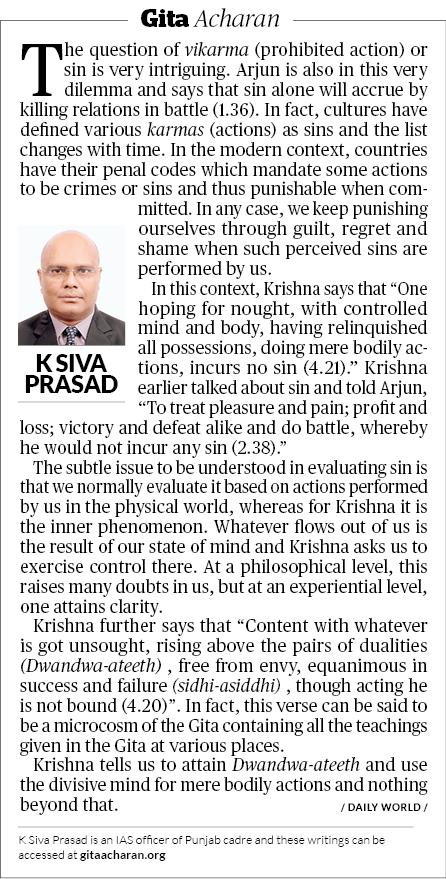 The question of vikarma (prohibited action) or sin is very intriguing. Arjun is also in this very dilemma and says that sin alone will accrue by killing relations in battle (1.36). In fact, cultures have defined various karmas (actions) as sins and the list changes with time. In the modern context, countries have their penal codes which mandate some actions to be crimes or sins and thus punishable when committed. In any case, we keep punishing ourselves through guilt, regret and shame when such perceived sins are performed by us.

In this context, Krishna says that "One hoping for nought, with controlled mind and body, having relinquished all possessions, doing mere bodily actions, incurs no sin (4.21)." Krishna earlier talked about sin and told Arjun, "To treat pleasure and pain; profit and loss; victory and defeat alike and do battle, whereby he would not incur any sin (2.38)."

The subtle issue to be understood in evaluating sin is that we normally evaluate it based on actions performed by us in the physical world, whereas for Krishna it is the inner phenomenon. Whatever flows out of us is the result of our state of mind and Krishna asks us to exercise control there. At a philosophical level, this raises many doubts in us, but at an experiential level, one attains clarity.

Krishna further says that "Content with whatever is got unsought, rising above the pairs of dualities (Dwandwa-ateeth), free from envy, equanimous in success and failure (sidhi-asiddhi), though acting he is not bound (4.20)". In fact, this verse can be said to be a microcosm of the Gita containing all the teachings given in the Gita at various places.

Krishna tells us to attain Dwandwa-ateeth and use the divisive mind for mere bodily actions and nothing beyond that.