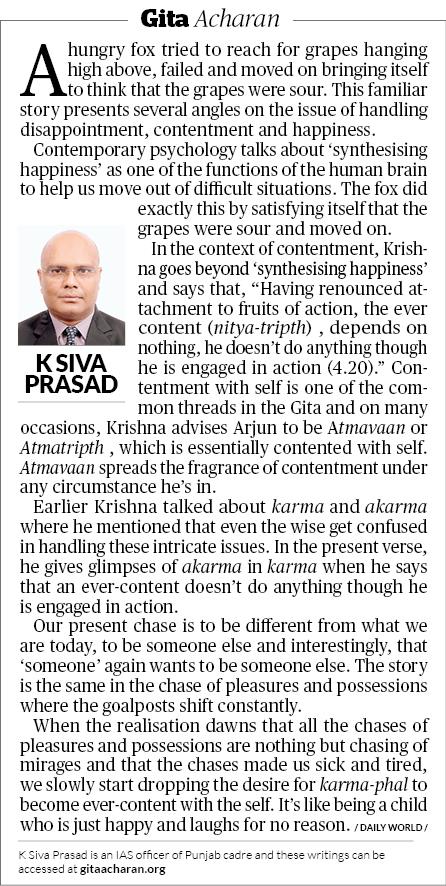 A hungry fox tried to reach for grapes hanging high above, failed and moved on bringing itself to think that the grapes were sour. This familiar story presents several angles on the issue of handling disappointment, contentment and happiness.

Contemporary psychology talks about 'synthesising happiness' as one of the functions of the human brain to help us move out of difficult situations. The fox did exactly this by satisfying itself that the grapes were sour and moved on.

In the context of contentment, Krishna goes beyond 'synthesising happiness' and says that, "Having renounced attachment to fruits of action, the ever content (nitya-tripth), depends on nothing, he doesn't do anything though he is engaged in action (4.20)." Contentment with self is one of the common threads in the Gita and on many occasions, Krishna advises Arjun to be Atmavaan or

Atmatripth, which is essentially contented with self. Atmavaan spreads the fragrance of contentment under any circumstances he's in.

Earlier Krishna talked about karma and akarma where he mentioned that even the wise get confused in handling these intricate issues. In the present verse, he gives glimpses of akarma in karma when he says that an ever-content doesn't do anything though he is engaged in action.

Our present chase is to be different from what we are today, to be someone else and interestingly, that 'someone' again wants to be someone else. The story is the same in the chase of pleasures and possessions where the goalposts shift constantly.

When the realisation dawns that all the chases of pleasures and possessions are nothing but chasing of mirages and that the chases made us sick and tired, we slowly start dropping the desire for karma-phal to become ever-content with the self. It's like being a child who is just happy and laughs for no reason.