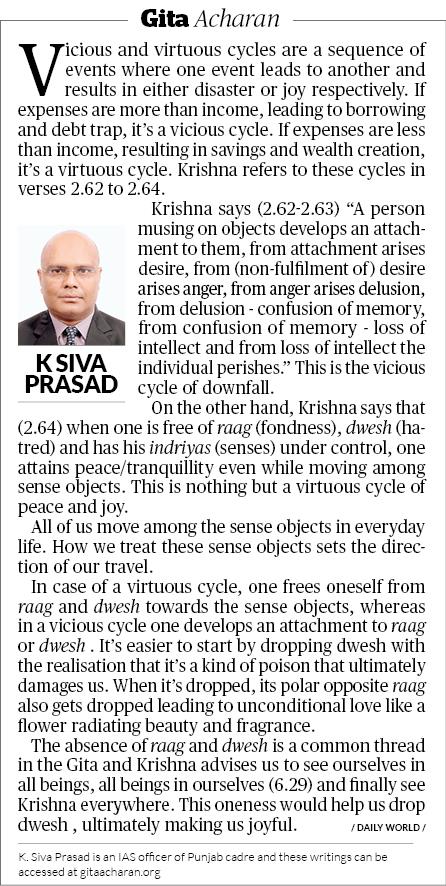 Vicious and virtuous cycles are a sequence of events where one event leads to another and results in either disaster or joy respectively. If expenses are more than income, leading to borrowing and debt trap, it's a vicious cycle. If expenses are less than income, resulting in savings and wealth creation, it's a virtuous cycle. Krishna refers to these cycles in verses 2.62 to 2.64.

On the other hand, Krishna says that (2.64) when one is free of raag (fondness), dwesh (hatred) and has his indriyas (senses) under control, one attains peace/tranquillity even while moving among sense objects. This is nothing but a virtuous cycle of peace and joy.

In case of a virtuous cycle, one frees oneself from raag and dwesh towards the sense objects, whereas in a vicious cycle one develops an attachment to raag or dwesh. It's easier to start by dropping dwesh with the realisation that it's a kind of poison that ultimately damages us. When it's dropped, its polar opposite raag also gets dropped leading to unconditional love like a flower radiating beauty and fragrance.

The absence of raag and dwesh is a common thread in the Gita and Krishna advises us to see ourselves in all beings, all beings in ourselves (6.29) and finally see Krishna everywhere. This oneness would help us drop dwesh, ultimately making us joyful.