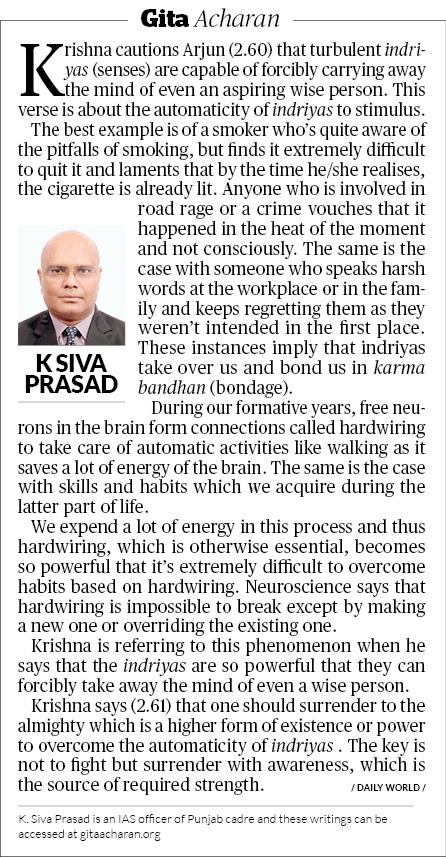 Krishna cautions Arjun (2.60) that turbulent indriyas (senses) are capable of forcibly carrying away the mind of even an aspiring wise person. This verse is about the automaticity of indriyas to stimulus.

The best example is of a smoker who's quite aware of the pitfalls of smoking, but finds it extremely difficult to quit it and laments that by the time he/she realises, the cigarette is already lit. Anyone who is involved in road rage or a crime vouches that it happened in the heat of the moment and not consciously. The same is the case with someone who speaks harsh words at the workplace or in the family and keeps regretting them as they weren't intended in the first place. These instances imply that indriyas take over us and bond us in karma bandhan (bondage).

During our formative years, free neurons in the brain form connections called hardwiring to take care of automatic activities like walking as it saves a lot of energy of the brain. The same is the case with skills and habits which we acquire during the latter part of life.

We expend a lot of energy in this process and thus hardwiring, which is otherwise essential, becomes so powerful that it's extremely difficult to overcome habits based on hardwiring. Neuroscience says that hardwiring is impossible to break except by making a new one or overriding the existing one.

Krishna is referring to this phenomenon when he says that the indriyas are so powerful that they can forcibly take away the mind of even a wise person.

Krishna says (2.61) that one should surrender to the almighty which is a higher form of existence or power to overcome the automaticity of indriyas. The key is not to fight but surrender with awareness, which is the source of required strength.