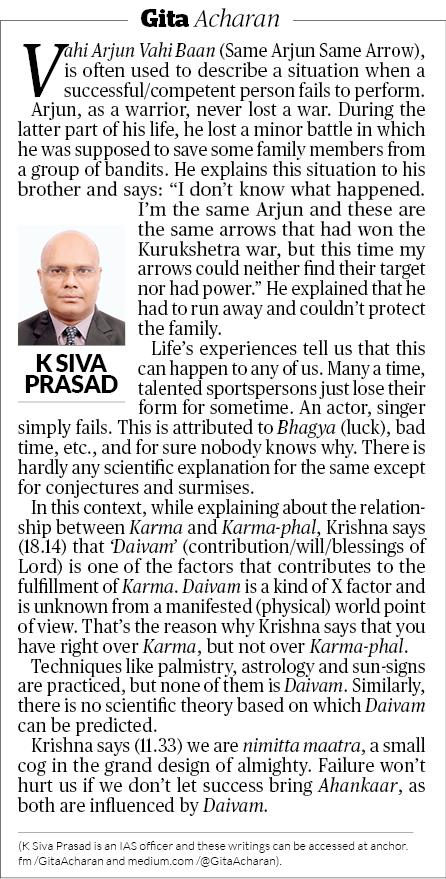 Arjun, as a warrior, never lost a war. During the latter part of his life, he lost a minor battle in which he was supposed to save some family members from a group of bandits. He explains this situation to his brother and says: "I don't know what happened. I'm the same Arjun and these are the same arrows that had won the Kurukshetra war, but this time my arrows could neither find their target nor had power." He explained that he had to run away and couldn't protect the family.

Life's experiences tell us that this can happen to any of us. Many a time, talented sportspersons just lose their form for sometime. An actor, singer simply fails. This is attributed to Bhagya (luck), bad time etc. and for sure nobody knows why. There is hardly any scientific explanation for the same except for conjectures and surmises.

In this context, while explaining about the relationship between Karma and Karma-phal, Krishna says (18.14) that 'Daivam' (contribution/will/blessings of Lord) is one of the factors that contributes to the fulfillment of Karma. Daivam is a kind of X factor and is unknown from a manifested (physical) world point of view. That's the reason why Krishna says that you have right over Karma, but not over Karma-phal.

Techniques like palmistry, astrology and sun-signs are practiced, but none of them are Daivam. Similarly, there is no scientific theory based on which Daivam can be predicted.

Krishna says (11.33) we are nimitta maatra, a small cog in the grand design of almighty. Failure won't hurt us if we don't let success bring Ahankaar, as both are influenced by Daivam.