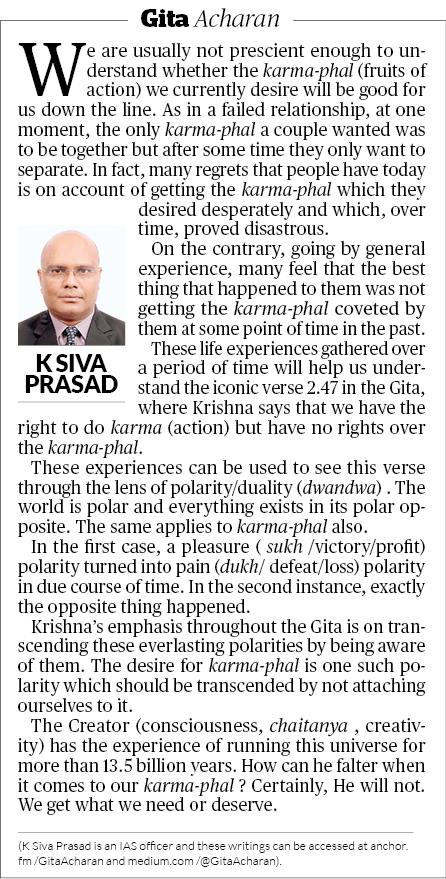 We are usually not prescient enough to understand whether the karma-phal (fruits of action) we currently desire will be good for us down the line. As in a failed relationship, at one moment, the only karma-phal a couple wanted was to be together but after some time they only want to separate. In fact, many regrets that people have today is on account of getting the karma phal which they desired desperately and which, over time, proved disastrous.

On the contrary, going by general experience, many feel that the best thing that happened to them was not getting the karma-phal coveted by them at some point of time in the past.

These life experiences gathered over a period of time will help us understand the iconic verse 2.47 in the Gita, where Krishna says that we have the right to do karma (action) but have no rights over the karma-phal.

These experiences can be used to see this verse through the lens of polarity/duality (dwandwa). The world is polar and everything exists in its polar opposite. The same applies to karma-phal also.

In the first case, a pleasure (sukh/victory/profit) polarity turned into pain (dukh/defeat/loss) polarity in due course of time. In the second instance, exactly the opposite thing happened.

Krishna's emphasis throughout the Gita is on transcending these everlasting polarities by being aware of them. The desire for karma-phal is one such polarity which should be transcended by not attaching ourselves to it.

The Creator (consciousness, chaitanya, creativity) has the experience of running this universe for more than 13.5 billion years. How can he falter when it comes to our karma-phal? Certainly, He will not. We get what we need or deserve.