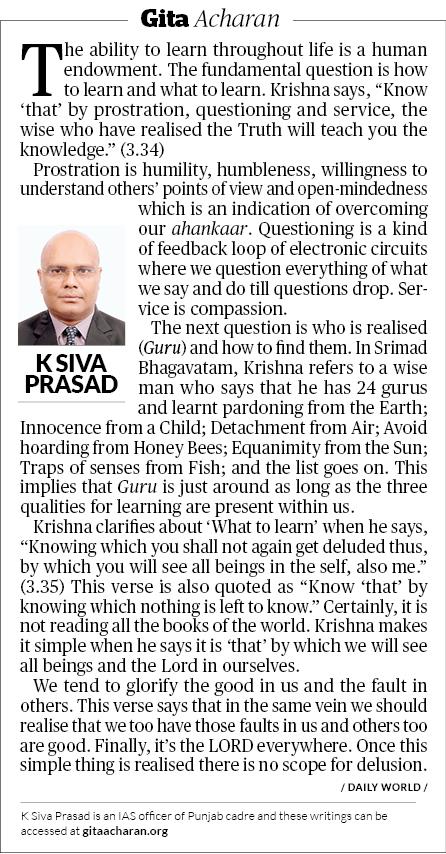 The ability to learn throughout life is a human endowment. The fundamental question is how to learn and what to learn. Krishna says, "Know 'that' by prostration, questioning and service, the wise who have realised the Truth will teach you the knowledge." (3.34)

Prostration is humility, humbleness, willingness to understand others' points of view and open-mindedness which is an indication of overcoming our ahankaar. Questioning is a kind of feedback loop of electronic circuits where we question everything of what we say and do till questions drop. Service is compassion.

The next question is who is realised (Guru) and how to find them. In Srimad Bhagavatam, Krishna refers to a wise man who says that he has 24 gurus and learnt pardoning from the Earth; Innocence from a Child; Detachment from Air; Avoid hoarding from Honey Bees; Equanimity from the Sun; Traps of senses from Fish; and the list goes on. This implies that Guru is just around as long as the three qualities for learning are present within us.

Krishna clarifies about 'What to learn' when he says, "Knowing which you shall not again get deluded thus, by which you will see all beings in the self, also me." (3.35) This verse is also quoted as "Know 'that' by knowing which nothing is left to know." Certainly, it is not reading all the books of the world. Krishna makes it simple when he says it is 'that' by which we will see all beings and the Lord in ourselves.

We tend to glorify the good in us and the fault in others. This verse says that in the same vein we should realise that we too have those faults in us and others too are good. Finally, it's the LORD everywhere. Once this simple thing is realised there is no scope for delusion.