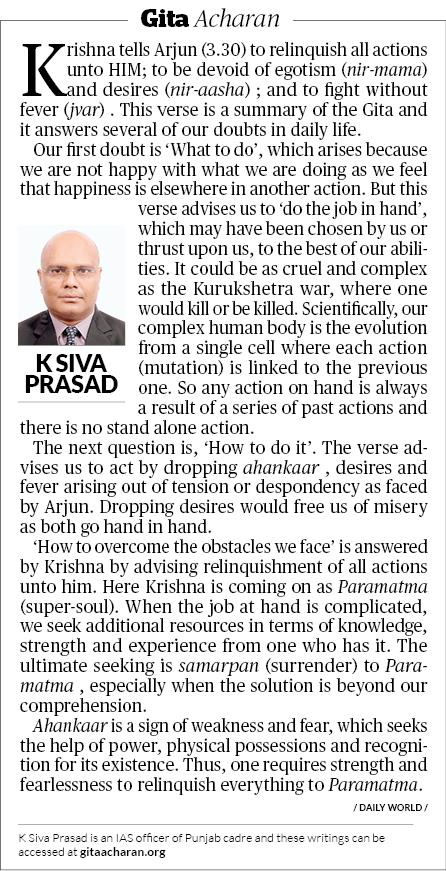 Bhagavad Gita is a coherent blending of two levels and we need to be aware of this to understand the Gita. Sometimes Krishna comes as a friend or a guide to Arjun explaining the daily issues faced by humans. Sometimes he comes as Paramatma (super-soul) and in that state he says (4.1) that I gave this imperishable Yoga to Vivasat, which was handed down in succession to raja-rishis (royal rishis) and its sight was lost with time (4.2).

Vivasat is translated as Sun-God, which is a metaphor for light and Krishna is indicating that he was before the light. It is accepted that this universe started with light and matter formed subsequently.

Krishna refers to raja-rishis who are nothing but enlightened ones at various points in time. The sight of this knowledge was lost because over time it got relegated from an experiential level to ritualism; less of practice and more of preaching, taking the shape of religions and sects.

Arjun questions (4.4) as to how come Krishna taught this to the Sun as his birth is recent. Krishna replies (4.5) that we had many births and you are not aware of them, whereas I am. This question of Arjun is very natural and logical at the human level. At this level, we are under the control of time to experience birth and death. We don't have any clue about what was before birth and after death.

Krishna's reply is at the Paramatma level which is beyond time. Earlier, Krishna had explained about atma which is eternal and changes the physical bodies like how we discard worn-out clothes.

Whoever reaches that eternal state is beyond time. A flower doesn't know about its power to blossom whereas this power was there before and will remain after the life of the flower.