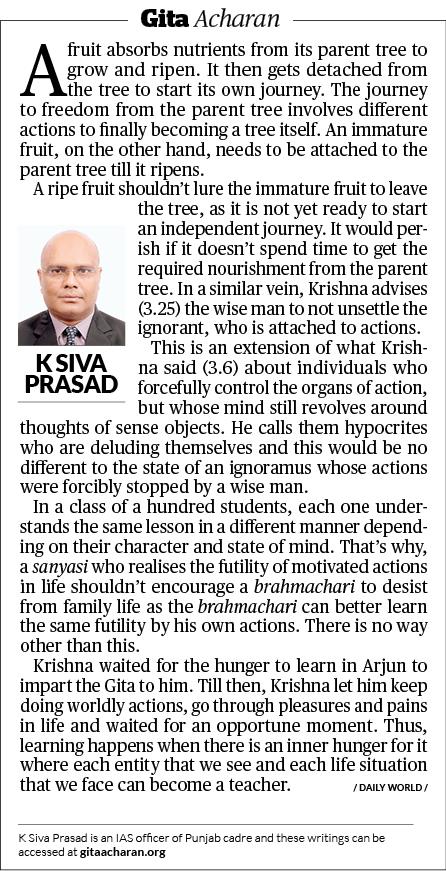 Krishna says that (3.27) " Karmas (actions) in all situations are performed by the gunas (qualities or characters) of nature; one who is deluded by ahankaar thinks 'I am doer'. One (3.28) with true insight into the distinctions between gunas and karmas knows that gunas interact with gunas and hence he's not attached."

It should be noted that no guna is superior or inferior to any other guna; they are just gunas. For example, if one has a high percentage of Rajo guna, they would be deeply inclined towards action and would not be able to sleep, thus, a percentage of Tamas is needed to sleep.

Secondly, we need to be aware of the guna that is dominating us at the present moment. For example, under the influence of Tamas, one would tend to be a couch potato and watch TV. On the other hand, if their spouse were in the Rajo guna, then he/she would like to go out for some shopping, a movie, visit friends etc. Subsequent situations may be due to the interaction between the tamo and rajo gunas. Similar situations driven by the interaction of gunas occur at workplaces too.

Krishna explains (14.22-14.26) that we should be able to transcend gunas to become Guna-ateeth, a state where we are aware of the gunas which dominate us in the present moment and we remain a mere witness to their interactions in the manifested world.