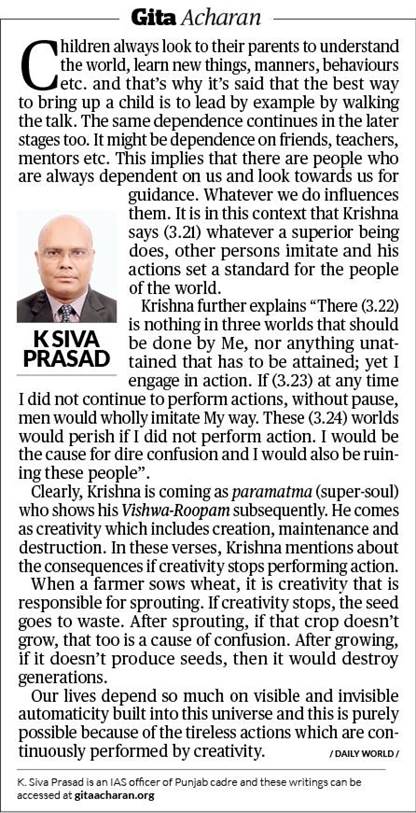 In our daily life, we get attached to action which is described as aasakti (interest or attachment) or we are detached from it - virakti (hatred or disinterested). However, Krishna refers to a third state, anaasakti (dropping both attachment and detachment) which is beyond both. He says (3.25) that the avidwan (ignorant) act with an attachment to action and the vidwan (wise) acts unattached, for the welfare of the world.

Actions based on aasakti and virakti can make us miserable. The presence of a loved one (aasakti) brings us happiness and their absence makes us unhappy. Similarly, the presence of a hated one (virakti) makes us unhappy and their absence brings relief. Hence, both aasakti or virakti are capable of swinging us between the polarities of pleasure and pain. Krishna, therefore, advises us to transcend both and be anaasakt, while performing any action.

Anaasakth is like being a performer in a drama and being a part of the audience at the same time. An artist is expected to act in the role assigned to them with dedication and to the best of their abilities. To achieve this, one should keep enhancing their skills, knowledge etc. in the relevant field of action. One should simultaneously be a part of the audience in the gallery, observing the drama. While the first part is our duty in the outer world, the latter is for our inner self. While the motivation and choice of action come from gunas, it is anaasakti that should be practised while performing these actions. This when mastered, is the Gita implemented.