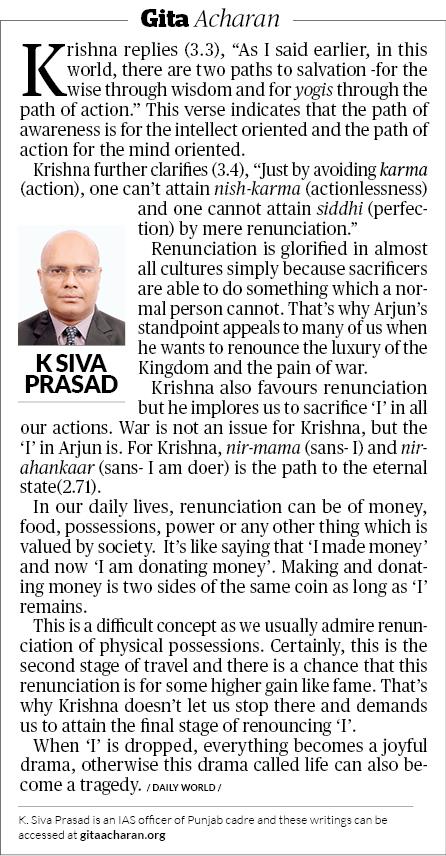 Krishna replies (3.3), "As I said earlier, in this world, there are two paths to salvation -for the wise through wisdom and for yogis through the path of action." This verse indicates that the path of awareness is for the intellect oriented and the path of action for the mind oriented.

Renunciation is glorified in almost all cultures simply because sacrificers are able to do something which a normal person cannot. That's why Arjun's standpoint appeals to many of us when he wants to renounce the luxury of the Kingdom and the pain of war.

Krishna also favours renunciation but he implores us to sacrifice 'I' in all our actions. War is not an issue for Krishna, but the 'I' in Arjun is. For Krishna, nir-mama (sans- I) and nir-ahankaar (sans- I am doer) is the path to the eternal state(2.71).

In our daily lives, renunciation can be of money, food, possessions, power or any other thing which is valued by society. It's like saying that 'I made money' and now 'I am donating money'. Making and donating money is two sides of the same coin as long as 'I' remains.

This is a difficult concept as we usually admire renunciation of physical possessions. Certainly, this is the second stage of travel and there is a chance that this renunciation is for some higher gain like fame. That's why Krishna doesn't let us stop there and demands us to attain the final stage of renouncing 'I'.

When 'I' is dropped, everything becomes a joyful drama, otherwise this drama called life can also become a tragedy.