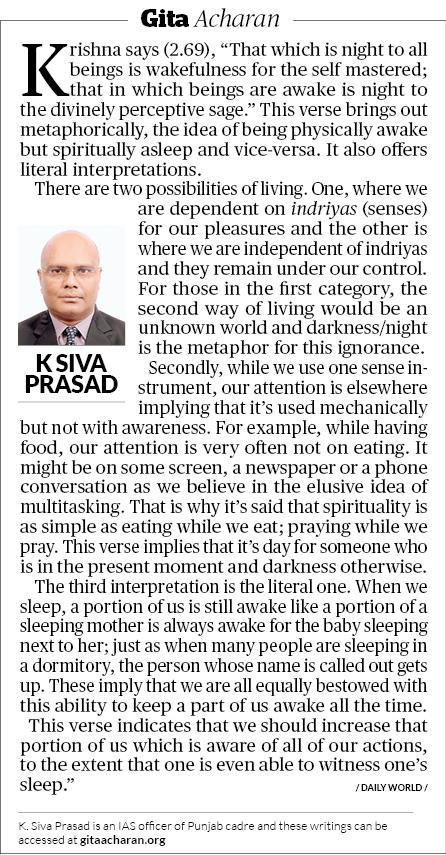 Krishna says (2.69), “That which is night to all beings is wakefulness for the self mastered; that in which beings are awake is night to the divinely perceptive sage." This verse brings out metaphorically, the idea of being physically awake but spiritually asleep and vice-versa. It also offers literal interpretations.

There are two possibilities of living. One, where we are dependent on indriyas (senses) for our pleasures and the other is where we are independent of indriyas and they remain under our control. For those in the first category, the second way of living would be an unknown world and darkness/night is the metaphor for this ignorance.

Secondly, while we use one sense instrument, our attention is elsewhere implying that it's used mechanically but not with awareness. For example, while having food, our attention is very often not on eating. It might be on some screen, a newspaper or a phone conversation as we believe in the elusive idea of multitasking. That's why it's said that spirituality is as simple as eating while we eat; praying while we pray. This verse implies that it's day for someone who is in the present moment and darkness otherwise.

The third interpretation is the literal one. When we sleep, a portion of us is still awake like a portion of a sleeping mother is always awake for the baby sleeping next to her; just as when many people are sleeping in a dormitory, the person whose name is called out gets up. These imply that we are all equally bestowed with this ability to keep a part of us awake all the time.

This verse indicates that we should increase that portion of us which is aware of all of our actions, to the extent that one is even able to witness one's sleep.