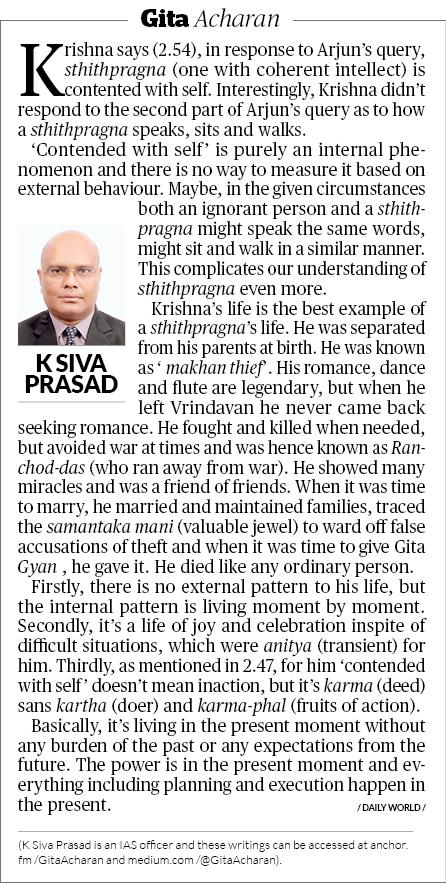 Krishna says (2.54), in response to Arjun's query, sthithpragna (one with coherent intellect) is contented with self. Interestingly, Krishna didn't respond to the second part of Arjun's query as to how a sthithpragna speaks, sits and walks.

'Contended with self' is purely an internal phenomenon and there is no way to measure it based on external behaviour. Maybe, in the given circumstances both an ignorant person and a sthithpragna might speak the same words, might sit and walk in a similar manner. This complicates our understanding of sthithpragna even more.

Krishna's life is the best example of a sthithpragna's life. He was separated from his parents at birth. He was known as 'makhan thief'. His romance, dance and flute are legendary, but when he left Vrindavan he never came back seeking romance. He fought and killed when needed, but avoided war at times and was hence known as Ran-chod-das(who ran away from war). He showed many miracles and was a friend of friends. When it was time to marry, he married and maintained families, traced the samantaka mani (valuable jewel) to ward off false accusations of theft and when it was time to give Gita Gyan, he gave it. He died like any ordinary person.

Firstly, there is no external pattern to his life, but the internal pattern is living moment by moment. Secondly, it's a life of joy and celebration inspite of difficult situations, which were anitya (transient) for him. Thirdly, as mentioned in 2.47, for him 'contended with self' doesn't mean inaction, but it's karma(deed) sans kartha(doer) and karma-phal (fruits of action).