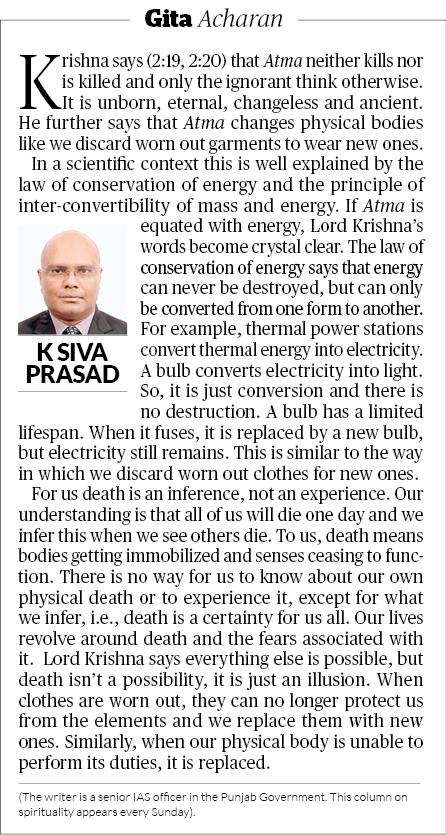 Krishna says (2:19, 2:20) that Atma neither kills nor is killed and only the ignorant think otherwise. It is unborn, eternal, changeless and ancient. He further says that Atma changes physical bodies like we discard worn out garments to wear new ones.

In a scientific context this is well explained by the law of conservation of energy and the principle of inter-convertibility of mass and energy. If Atma is equated with energy, Lord Krishna’s words become crystal clear. The law of conservation of energy says that energy can never be destroyed, but can only be converted from one form to another. For example, thermal power stations convert thermal energy into electricity. A bulb converts electricity into light. So, it is just conversion and there is no destruction. A bulb has a limited lifespan. When it fuses, it is replaced by a new bulb, but electricity still remains. This is similar to the way in which we discard worn out clothes for new ones.

For us death is an inference, not an experience. Our understanding is that all of us will die one day and we infer this when we see others die. To us, death means bodies getting immobilized and senses ceasing to function. There is no way for us to know about our own physical death or to experience it, except for what we infer i.e. death is a certainty for us all. Our lives revolve around death and the fears associated with it.

Lord Krishna says everything else is possible, but death isn't a possibility, it is just an illusion. When clothes are worn out, they can no longer protect us from the elements and we replace them with new ones. Similarly, when our physical body is unable to perform its duties, it is replaced.