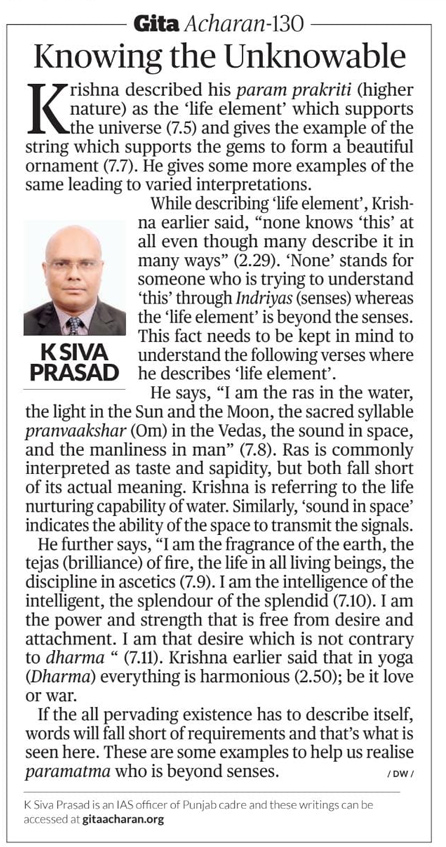 Krishna described his param prakriti (higher nature) as the 'life element' which supports the universe (7.5) and gives the example of the string which supports the gems to form a beautiful ornament (7.7). He gives some more examples of the same leading to varied interpretations.

While describing 'life element', Krishna earlier said, "none knows 'this' at all even though many describe it in many ways" (2.29). 'None' stands for someone who is trying to understand 'this' through Indriyas (senses) whereas the 'life element' is beyond the senses. This fact needs to be kept in mind to understand the following verses where he describes 'life element'.

He says, "I am the ras in the water, the light in the Sun and the Moon, the sacred syllable pranvaakshar (Om) in the Vedas, the sound in space, and the manliness in man" (7.8). Ras is commonly interpreted as taste and sapidity, but both fall short of its actual meaning. Krishna is referring to the life nurturing capability of water. Similarly, 'sound in space' indicates the ability of the space to transmit the signals.

He further says, "I am the fragrance of the earth, the tejas (brilliance) of fire, the life in all living beings, the discipline in ascetics (7.9). I am the intelligence of the intelligent, the splendour of the splendid (7.10). I am the power and strength that is free from desire and attachment. I am that desire which is not contrary to dharma " (7.11). Krishna earlier said that in yoga (Dharma) everything is harmonious (2.50); be it love or war.

If the all pervading existence has to describe itself, words will fall short of requirements and that's what is seen here. These are some examples to help us realise paramatma who is beyond senses.