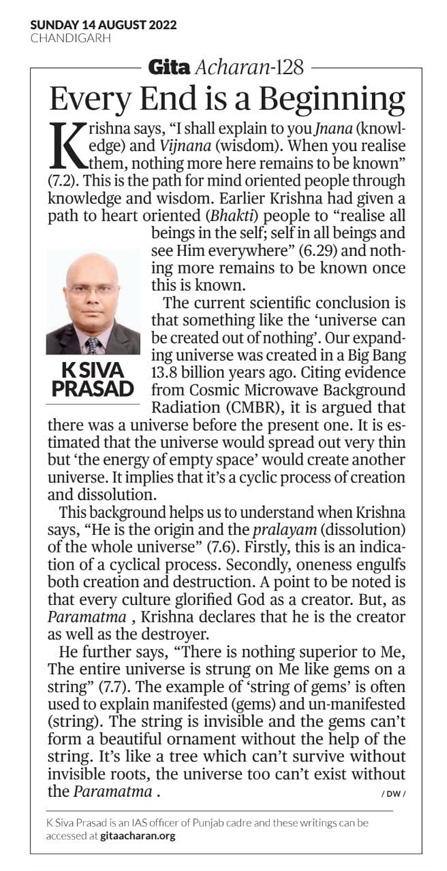 Krishna says, "I shall explain to you Jnana (knowledge) and Vijnana (wisdom). When you realise them, nothing more here remains to be known" (7.2). This is the path for mind oriented people through knowledge and wisdom. Earlier Krishna had given a path to heart oriented (Bhakti) people to "realise all beings in the self; self in all beings and see Him everywhere" (6.29) and nothing more remains to be known once this is known.

The current scientific conclusion is that something like the 'universe can be created out of nothing'. Our expanding universe was created in a Big Bang 13.8 billion years ago. Citing evidence from Cosmic Microwave Background Radiation (CMBR), it is argued that there was a universe before the present one. It is estimated that the universe would spread out very thin but 'the energy of empty space' would create another universe. It implies that it's a cyclic process of creation and dissolution.

This background helps us to understand when Krishna says, "He is the origin and the pralayam (dissolution) of the whole universe" (7.6). Firstly, this is an indication of a cyclical process. Secondly, oneness engulfs both creation and destruction. A point to be noted is that every culture glorified God as a creator. But, as Paramatma , Krishna declares that he is the creator as well as the destroyer.

He further says, "There is nothing superior to Me, The entire universe is strung on Me like gems on a string" (7.7). The example of 'string of gems' is often used to explain manifested (gems) and un-manifested (string). The string is invisible and the gems can't form a beautiful ornament without the help of the string. It's like a tree which can't survive without invisible roots, the universe too can't exist without the Paramatma .