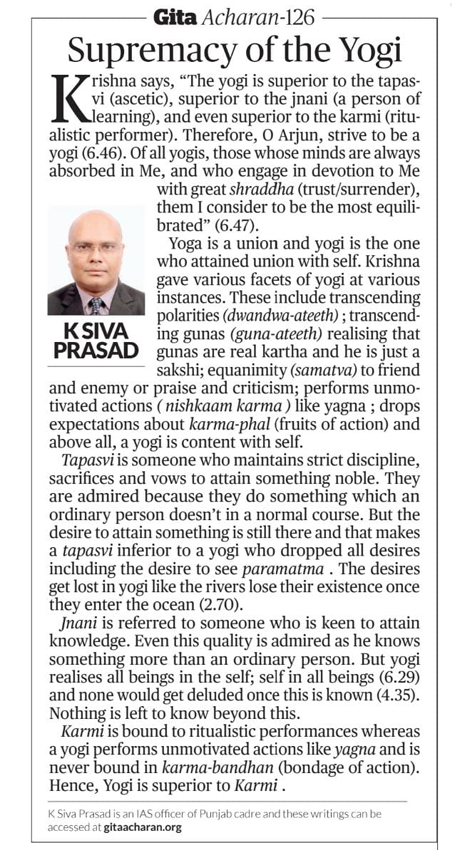 Krishna says, "The yogi is superior to the tapasvi (ascetic), superior to the jnani (a person of learning), and even superior to the karmi (ritualistic performer). Therefore, O Arjun, strive to be a yogi (6.46). Of all yogis, those whose minds are always absorbed in Me, and who engage in devotion to Me with great shraddha (trust/surrender), them I consider to be the most equilibrated" (6.47).

Yoga is a union and yogi is the one who attained union with self. Krishna gave various facets of yogi at various instances. These include transcending polarities (dwandwa-ateeth) ; transcending gunas (guna-ateeth) realising that gunas are real kartha and he is just a sakshi; equanimity (samatva) to friend and enemy or praise and criticism; performs unmotivated actions ( nishkaam karma ) like yagna ; drops expectations about karma-phal (fruits of action) and above all, a yogi is content with self.

Tapasvi is someone who maintains strict discipline, sacrifices and vows to attain something noble. They are admired because they do something which an ordinary person doesn't in a normal course. But the desire to attain something is still there and that makes a tapasvi inferior to a yogi who dropped all desires including the desire to see paramatma . The desires get lost in yogi like the rivers lose their existence once they enter the ocean (2.70).

Jnani is referred to someone who is keen to attain knowledge. Even this quality is admired as he knows something more than an ordinary person. But yogi realises all beings in the self; self in all beings (6.29) and none would get deluded once this is known (4.35). Nothing is left to know beyond this.

Karmi is bound to ritualistic performances whereas a yogi performs unmotivated actions like yagna and is never bound in karma-bandhan (bondage of action). Hence, Yogi is superior to Karmi .