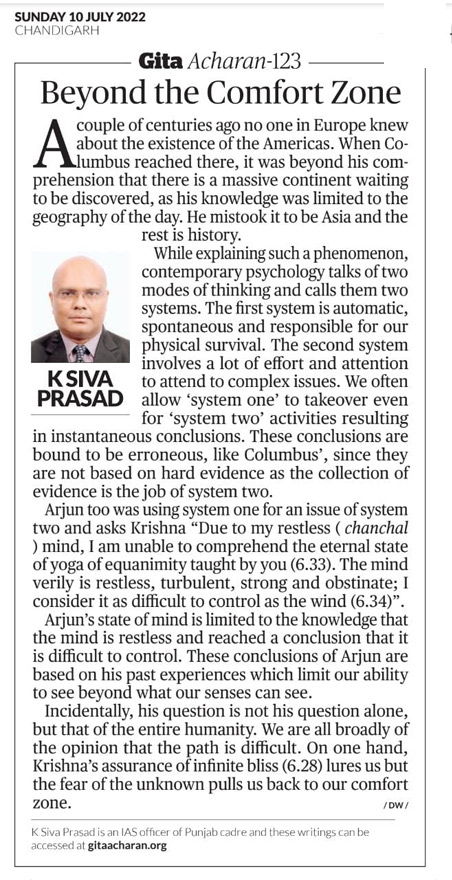 A couple of centuries ago no one in Europe knew about the existence of the Americas. When Columbus reached there, it was beyond his comprehension that there is a massive continent waiting to be discovered, as his knowledge was limited to the geography of the day. He mistook it to be Asia and the rest is history.

While explaining such a phenomenon, contemporary psychology talks of two modes of thinking and calls them two systems. The first system is automatic, spontaneous and responsible for our physical survival. The second system involves a lot of effort and attention to attend to complex issues. We often allow 'system one' to takeover even for 'system two' activities resulting in instantaneous conclusions. These conclusions are bound to be erroneous, like Columbus', since they are not based on hard evidence as the collection of evidence is the job of system two.

Arjun too was using system one for an issue of system two and asks Krishna "Due to my restless ( chanchal ) mind, I am unable to comprehend the eternal state of yoga of equanimity taught by you (6.33). The mind verily is restless, turbulent, strong and obstinate; I consider it as difficult to control as the wind (6.34)".

Arjun's state of mind is limited to the knowledge that the mind is restless and reached a conclusion that it is difficult to control. These conclusions of Arjun are based on his past experiences which limit our ability to see beyond what our senses can see.

Incidentally, his question is not his question alone, but that of the entire humanity. We are all broadly of the opinion that the path is difficult. On one hand, Krishna's assurance of infinite bliss (6.28) lures us but the fear of the unknown pulls us back to our comfort zone.